Want to know who I am? Try this on for size. 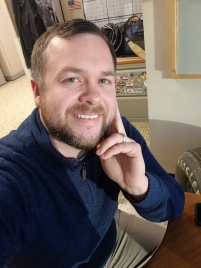 I’m a sports reporter turned news reporter, who flipped the script to PR, was asked to take on social media, and eventually transitioned to a full Marketing / PR hybrid.

Never hurts to be pliable.

My entire career I’ve been dogged by one question: “What’s your dream job?”

The premise is simple, but I’ve always found myself hung up on the follow through (kind of like that season of high school baseball where I got the occasional yips and would launch that throw to 2nd into centerfield). 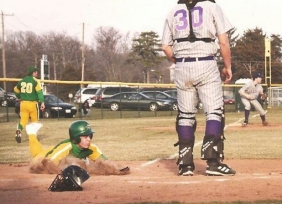 I grew up in a town without a stop light. It was a two minute drive from one end to the other, and there was one thing that perked me up each day more than anything. I loved sports. I mean the kind of love where I’d grab the morning paper during the summer, flip to the MLB standings and start fleshing out the Cincinnati Reds’ playoff chances in blue pen in the margins. Then when Dad would get home from his long day of work, mine would begin. I’d bat on the pitching machine (hitting tennis balls for the sake of our neighbors’ windows) until my hands bled and then beg for one more bucket of 50. It was my big dream in a small world.

As happens with many of these young sports dreams, it died when I stopped growing. The talent couldn’t overcome the size deficit, and I needed a Plan B.

Did I mention I love to talk?

Sports Broadcasting it was, and I was on my way. I arrived in one of the most beautiful places on earth, Athens, Ohio, and Ohio University’s E.W. Scripps School of Journalism. That’s where my path took shape through hours working on high school and Bobcats sports.

Then things got real. 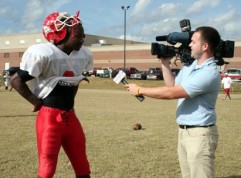 I moved again, this time to Augusta, Ga., home of The Masters, to be a weekend sports anchor and reporter at the CBS affiliate, WRDW. I got my first taste of pro sports, the SEC, and covering two-a-days when it’s 100 degrees at 8 a.m. When it was time to go, I took a chance again, landing in Johnson City, Tenn., NASCAR country. Working on weekend sports again, this time at their CBS affiliate, WJHL, Bristol Motor Speedway and Bristol Dragway became my home three weeks out of the year. No matter what anyone says, I refuse to take responsibility for the fact that it rained every one of those weeks. 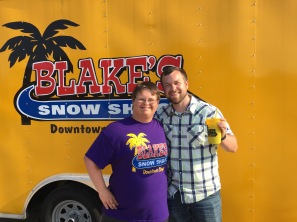 That’s when my path redefined itself.

I moved to Dallas, the first big city I’ve ever called home. There were probably triple the people in my apartment complex as in my hometown. I became a news reporter at CW33, shocking even the Jake of six months prior. It’s where I learned that creative writing doesn’t have to have a sports slant to work.

Two years later, NASCAR came calling again. I became the Broadcast Media Relations Manager at Texas Motor Speedway, providing video to our local and regional media and pitching the gospel according to racing across the country.

TMS is known as No Limits, Texas, and “no limits” has defined my run there. As my responsibilities expanded, my job title got smaller. Jake the Media Relations Manager added on planning, writing, and copy editing the track’s souvenir race program and media guide and started working with media across every medium. Jake the Media Manager tacked the track’s social media pages onto the docket. That’s right. I officially made the jump to Meme Lord.

There have been more changes than Peter Brady voice cracks when he sang in that one episode of The Brady Bunch, but through it all I’ve arrived at the answer to the dream job query.

It doesn’t matter if that story is a high school track champion who nearly died in a childhood lawnmower accident, a small town outside Dallas that doesn’t have running water, or the first African-American woman to pit a NASCAR race car. It also doesn’t matter if I’m telling the story myself or pitching to someone prepared to put their own spin on it.

I was born to do this. The jobs, the cities, and the co-workers may change, but storytelling won’t.

So what’s my dream job? Now you know.